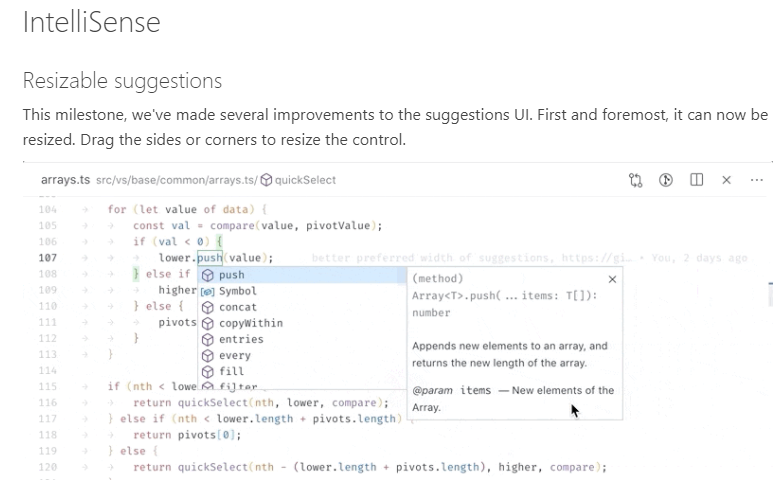 In October a new release for Visual Studio Code has been released. This release includes two features that are also nice for Business Central developers.

Until now it was not possible to change the window for IntelliSense Suggestions. The window always had a fixed size. So you could sometimes not read the description for the suggestions if they were long. In the following screenshot you can see what the suggestion window looked like so far. On the right side the description is “cut off”.

With the new release you can adjust and enlarge the size of the window to your needs.

And it gets even better – these settings are saved. For this I quote from the release notes:

“The size of the suggestions list will be saved and restored across sessions. The size of the details pane is only saved per session, since that size tends to be more variable. Also, the editor.suggest.maxVisibleSuggestions setting has become obsolete.”

In addition, the Suggestions can now also handle cursor movements. Here again an excerpt from the release notes:

“Last but not least, you can now move the cursor while suggestions are showing. For instance, you can trigger suggestions at the end of a word, move left to see more suggestions, and then use replace to overwrite the word.”

Maybe not the most exciting new features ever, but I’m always happy about every improvement of Visual Studio code.

You can find more information about the october release following this link.

One thought on “VS Code October Release – New IntelliSense Features”