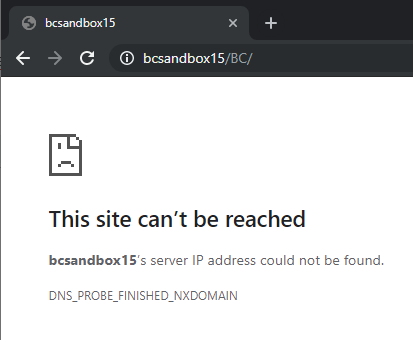 I love when there are new Business Central releases. It is especially interesting with new cool features being released. With Business Central 2019 Release Wave 2, users now have the possibility to open multiple windows in the web client. To see some other features, check out this post by Roberto Stefanetti. Yes, I have been waiting for a long time to see this! When I created a new container with the new business central version, I saw myself confronted with a mean message in my browser caused by a docker name resolution problem:

“This site can’t be reached. bcsandbox15’s server IP address could not be found. DNS_PROBE_FINISHED_NXDOMAIN”

No!!!! Why? My creation script has always worked. I tried to ping the IP. Everything fine. Hmmm.

The Solution to the Docker Name Resolution Problem

What was going on here? After checking out freddy’s guide Troubleshooting NAV on Docker and one very useful comment of my collegue I tried to replace my container hostname “bcsandbox15” with the ip “192.168.239.75”. Woops, that was it! Docker Name Resolution Problem fixed, I could finally connect to my web client.

As it turns out, there is a magical command that you can use when creating your container. It is called UpdateHosts. When I added this parameter to my container creation script, everything worked like a charme. The parameter forces the computer to add an entry to the hosts file in ” c:\windows\system32\drivers\…” to specify that the ip “192.168.239.75” is “bcsandbox15”. Yes, I stole the words from Freddy Kristiansen in his troubleshooting post mentioned above.

Hope this helps some of you. Have a nice day!